My first paper from my postdoctoral work at the Oklahoma Biological Survey has been published on the open-source hardware I designed to record birds crossing the moon entitled: LunAero: Automated “Smart” Hardware for Recording Video of Nocturnal Migration.  We published it in HardwareX, so it is open access and available directly at the publisher’s site.  As usual, feel free to ask for a preprint.  The HardwareX publication style really meshes well with the intentions of creating an accessible platform for moon tracking projects.  The paper reads like a “recipe” of how to replicate our automated hardware on your own, down to how much we paid for the screws.

There are a few things that are out of date on this paper (published in 2020), such as the use of the ODROID computer.  We now use a Raspberry Pi since the introduction of USB3 ports.  The latest improvements have essentially halved the cost of the device down to ~$200.  Amusingly, since the publication of this article, I was asked to assist members of the GeoCarb project at OU to set up logging for a piece of equipment that does very similar functions to LunAero.  I had not heard of the instrument until I started working with GeoCarb, and I had myself a good chuckle when reading the manual.  The amusement stems from the fact that their instrument adds more than a few zeros to the cost, if you catch my drift ($$$). 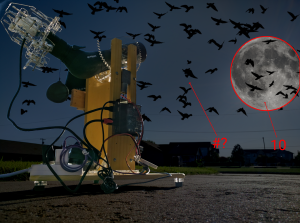 Moon watching is a method of quantifying nocturnal bird migration by focusing a telescope on the moon and recording observations of flying birds silhouetted against the lunar surface. Although simple and well-established, researchers use moon watching infrequently due in part to the hours of late night observation it requires. To reduce the labor entailed in moon watching, we designed a low-cost system called LunAero that can track and record video of the moon at night. Here we present a proof-of-concept prototype that can serve as a platform for citizen scientists interested in observing nocturnal bird migration. We tested the video recording on clear nights from February 2018 to May 2019 when the moon was full or nearly full. Manual analysis of a 1.5 h sample of video revealed a total of 450 birds, which is a much higher detection rate than previous moon watching efforts have yielded. The hardware described here is part of a larger effort involving software development (currently underway) to automate recorded video analysis. We argue that LunAero can reduce the labor involved in moon watching, offer improved data quality over traditional moon watching, and provide insights into social behavior and wind-drift compensation in migrating birds.