A few weeks ago, I posted about a circuit board I designed to use the TB6612FNG motor controller, seen here, and went through the steps of producing the board for prototyping in subsequent posts. Now that I have had enough time to work with the prototype board, I have made some changes to the design which should improve performance.

The first major change in this design is the addition of flyback diodes to the motor out lines of the TB6612FNG. Schottky diodes were added which protect the circuit from sudden overvoltages going either direction, as seen in the schematic image below. As motors can act as inductors, especially when quickly switching direction, I found diode protection to be necessary. The TB6612FNG chip claims to have protection from overvoltages, but it does not specify the kind of protection it provides. The motors I will be using at times will be running at 12V with some hefty current. Since I want to avoid frying my little controllers, it seems natural to exert control over the situation by adding some diodes. 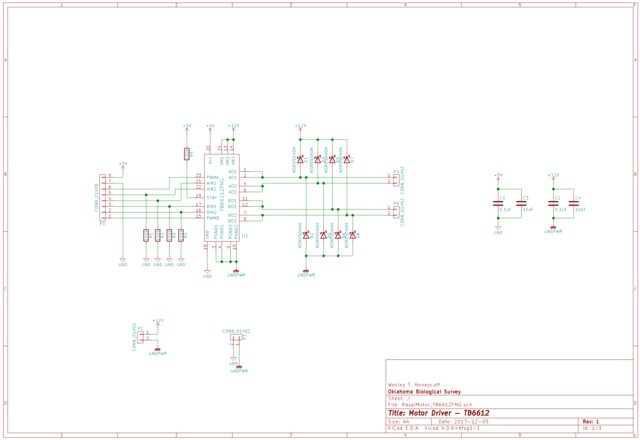 The diodes I picked for this design are NSR0530HT1G Schottky rectifiers. I chose to use Schottky diodes over traditional diodes as these have a low forward voltage to keep the motor running at speed. Additionally, I chose to use rectifier diodes over signal diodes since I am running motors at 12V. Overvoltage spikes which may occur are expected to exceed this, making the high voltage tolerance of a rectifier worthwhile.

As far as I am aware, most commercial TB6612FNG breakout boards do not include diodes. There is some debate about the necessity of diodes for all motor cases, especially when the controller claims to have built-in protection. If a user chooses to add diodes, it will have to be in circuitry in addition to the breakout board. In my opinion, it is easier to leave off diodes from a board if you don’t think you need them than it is to add them on later when you realize how much you do need them.

While running the prototype board through its paces, I found that the traces on my original design were too thin. I had one board pop a trace while giving myself a reminder of basic electronics and accidental shorts. So, on this updated version of the board, I have significantly increased the trace width using filled zones. As seen in the picture below, Any traces that will be carrying a load above simple signalling have been given filled zones. 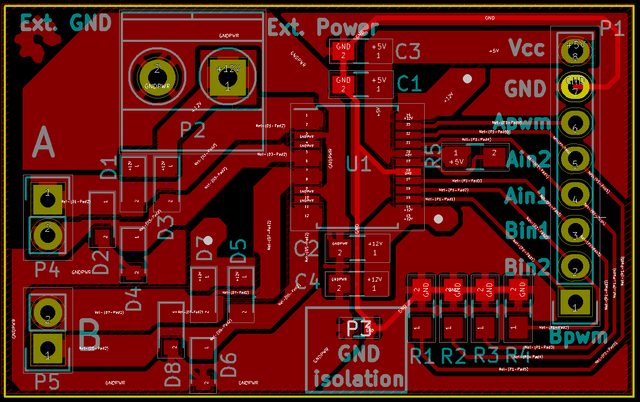 The above image omits the back side copper layer so you can see what’s on the front side. This image also shows off a little artistic flair I added in the top corner. On the front copper layer, there will be a tiny Open Source Hardware gear symbol. I had some extra room, so I could not resist doing something fun.

The last design change is a bit more minor. I changed the 10μF capacitor from electrolytic to multi-layered ceramic. This change saves some board space. I was taught that for capacitors 1μF and above, I should use electrolytic, and I had never questioned this statement.  I discovered the reason I was told this while doing some light reading on capacitor materials.

Apparently, the idea that the electrolytic caps are better for large charges is a holdover from the dark ages of through-holes and Radio Shacks. The old disk ceramic capacitors could not be reliably produced above this capacitance threshold without great expense. As a result, the less expensive electrolytic capacitors became the standard for these applications. However, there have been lots of advances since then, including the ability to produce small, inexpensive, and reliable capacitors with various materials. Electrolytics are not necessarily better, they just remain in the electronics zeitgeist.

I hope you haven’t been squinting too hard at those pictures. If you intend to actually make use of my designs, use the real thing. I published this on Github. Grab a copy for yourself here.