As part of my collaborative work on the XGEM project, some of older sensors are getting new life.  I have deployed several of the original models and some new custom devices at a simulated urban canyon.  My colleagues in Architecture such as Lee Fithian and Wenwen Cheng are interested in improving these sites.  Since the first architect came along, people have been concerned about urban canyons.  He may not have called them “urban canyons”, in Vitruvius’ De architectura goes into detail about city layout to prevent miasma.  We may not plan streets based on wind gods anymore, but we are still concerned about health.  The hope in deploying my gas sensors for urban canyon applications is we can learn new things about this.  We are interested in learning more about how gas circulates in cities.

The circulation of gas in urban canyons is quite interesting.  Prof. Fithian has done a few wind tunnel tests on the topic, but now she is scaling up.  At her prototype lab made of used CONEX shipping containers, we can observe phenomena at a larger scale.  My colleague Liz Pillar-Little will be conducting UAS flights at the test site while I handle stationary sensors.  The weather isn’t great for this kind of work, so I’m a little sunburned.  I sure am happy I taught myself to weld though, it came in handy.

The first image shows my original sensors peek out above the top of the shipping container.  The solar panels look so small!  The second image shows custom gas sensors for urban canyon near the bottom of the boxes.  The difference in these two positions will allow us to distinguish gas flowing above and within the urban canyon.  Finally, we have a close up of the custom sensors.  The box came out nice, but I ended up sealing them with silicone and zip ties.  Since I need to pull data from the devices, the ugly closures are necessary. 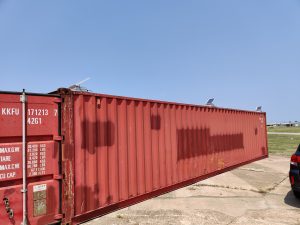 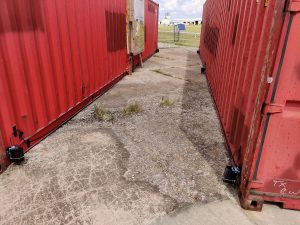 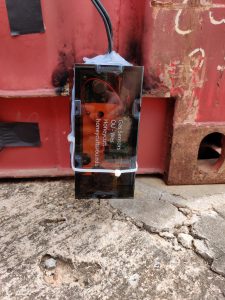